A group of Ex-Service men met for the purpose of formulating a post.  It was moved by W.A. Buttles that the local Chapter be known as the Wenatchee Post until the organization was finally completed when the name could be changed.

Wenatchee was the 10th post in Washington to receive its charter.  SInce then it has been known as Wenatchee Post No. 10. 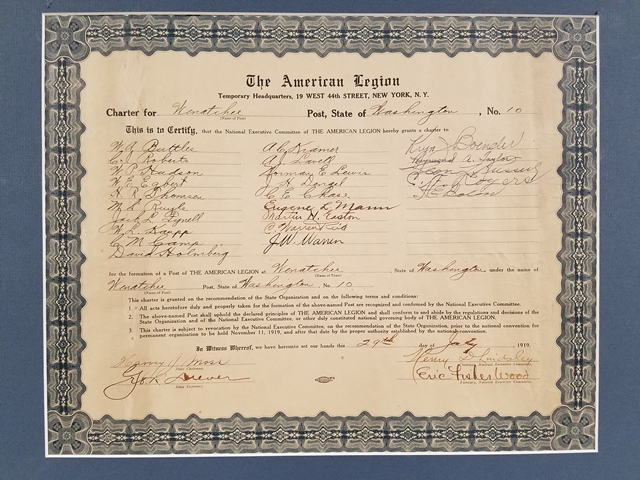 First meeting and Election of Officers

The Charter had arrived and C. Warren Reid had moved that a frame be procured.  The motion carried.

The Legion members opened the theatre with a home talent production at which seats sold for $1.50 to $5.00.  Gene Crider and C. Warren Reid were stars in the grand opening.

The Post netted $500.00 from this event and received a letter of Thanks from the management.

A memorial was created to honor those lost between 1917-1919.  The structure was originally placed on the Veterans Memorial Hall site and later moved to Wenatchee Cemetery where it is still located.  Exact dates are still to be determined.